The Other Side of Dark by Sarah Smith - Reviewed 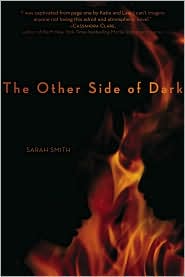 The Other Side of Dark
Author: Sarah Smith
Release Date: November 2010
Publisher: Simon & Schuster Children's Publishing
Pages: 312
Target Age: Young Adult
Summary from Barnes and Noble:
What good is being able to see and speak to the dead if it doesn't help solve a mystery surrounding them? Fifteen-year-old Katie Mullens can interact with ghosts, including that of her father, though not of her more recently deceased mother. Law Walker is the mixed-race son of activists--an academic father who's a prominent advocate for slavery reparations ("Even in pajamas, standing at the top of the stairs and saying, ‘Susan, I have lost my toothbrush,' his voice quivers with the weight of four hundred years of injustice") and a mother struggling to save a historic Boston building. Forging a friendship as outsiders--their classmates have written off Katie as crazy, and Law is a self-described geek trying to escape his domineering father's shadow--Katie and Law dive into a thickening tangle involving slavery, a treasure, and an old cabal that has modern-day repercussions for living and dead alike. Alternating between the teenagers' distinct and searching first-person narratives, and combining real history with quests for identity both personal and national, adult author Smith's YA debut is much more than just a ghost story.

I signed up for this book through Star Book Tours. I saw the word ghost and thought "ooohh I like stories about ghosts."  This was not quite the ghost story I was expecting though.  The Other Side of Dark focuses on Katie and Law, two very different characters that come from very different worlds.  I really enjoyed reading about Katie. Something about her character really pulled me in and I felt like I had known this girl her whole life, and I wanted to help her through the horrible loss of her mother.  Law was a bit harder for me to connect with.  Rich and privileged, he feels smothered by his father's beliefs and has a hard time deciding on what he believes.  The story focuses on a house that Law's mother wants to save and one his father can't stand to have around. My favorite part of reading this story was how much it made me stop and think about things like: losing everything you know, reparations, and standing up for what you believe in, no matter what the consequence.  A great story about growing up and overcoming obstacles with many great twists and turns that kept me on my toes.