Earth Angel, Guest Post and Give Away by E.Van Lowe 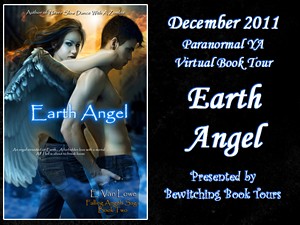 They say don’t judge a book by its cover, but let’s face it, we all do it.  I’m as guilty of this as the next person, but when my novel Boyfriend From Hell hit the bookstore shelves in September, I became guilty of something else—cover envy.  That twinge of jealousy you get when you see an awesome book cover and wish that cover was on your book.


It’s not that I didn’t like the original cover for Boyfriend From Hell, I did like it.  But when I wrote the book I envisioned a more beautiful cover.  Covers like Hush Hush by Becca Fitzpatrick or Beautiful Creatures by Kami Garcia and Margaret Stohl.  I am a fan of pretty things.
The reviews for Boyfriend From Hell were good.  But some time in mid-October sales began to slump.  It was then I convinced my publisher I needed a new look for both Boyfriend From Hell and Earth Angel.  Enter Adara Rosalie, an amazing artist with a mastery of Photoshop.  The first thing that struck me when I looked at Adara’s portfolio was how beautiful her work was.
I contacted Adara (also known as Jayde), and was lucky enough to catch her between commissions.  She liked what the books were about and went to work.  A month after she began, and twenty or so prototypes in,  Adara presented  me the cover for Earth Angel.   “Stop,” I said.  “This is it.  You don’t need to go any further.” I sent the cover off to my publisher who was elated.  A few days later she presented me with the Boyfriend From Hell cover.  And guess what happened?  I was cured of my cover envy.  Aren’t they beautiful?
What’s going on between the covers ain’t too shabby either. You can check out both books on my website http://evanlowe.com/. There’s even a free sample of Boyfriend From Hell on the home page so you can try it before you but it.  While you’re there please click on the buttons to follow me on Twitter and like my Facebook Fan Page.If you’d like to see more of Adara’s work you can see it here: http://www.redbubble.com/people/jayderosalie

Boyfriend from Hell
By E Van Lowe
Genre: Paranormal YA
Book 1
Aww, Hell No!
Fifteen year-old Megan Barnett and her single mom, Suze, have a special relationship—they are friends, close friends, who do almost everything together.
“But come on, guys, she’s my mother… Can I really tell her that while we’re snuggled up on the sofa watching Spider Man Three, I’m secretly undressing James Franco with my eyes?  Of course not…”
The special bond takes a turn for the worse when Suze decides to start dating again.  She hasn’t had a man in her life since Megan’s father left ten years ago.
Enter two mysterious young men, Megan’s new classmate, sinfully attractive bad boy, Guy Matson, and the dangerously handsome art dealer, Armando.  Before long Megan and Suze both wind up in steamy relationships.  But neither of the handsome guys is quite what he seems.  In fact, one of them is Satan, with his sights set on a new bride.  Megan has precious little time to figure out how to stop him.  If she doesn’t, either Megan or Suze are quite literally going to HELL.
Boyfriend From Hell is the first book in the Falling Angels Saga from the author of the gruesomely hilarious, Never Slow Dance With A Zombie
www.whitewhiskerbooks.com

Earth Angel is now available at Amazon
Sadly I can't find it on Barnes and Noble yet.

About The Author
E. Van Lowe is an author, television writer, screenwriter, Playwright and Producer who has written and produced such shows as The Cosby Show, Even Stevens, and Homeboys In Outer Space.  He has been nominated for both an Emmy and an Academy Award.  Van Lowe recently stepped into the young adult fiction genre with his comedic novel,Never Slow Dance With A Zombie.  It was a selection of the Scholastic Book Club, and a nominee for an ALA Award.  Boyfriend From Hell is Van Lowe’s second YA novel.
www.evanlowe.com
http://vanlowe.blogspot.com/
http://www.facebook.com/pages/E-Van-Lowe/152364748167154

My Thoughts on Earth Angel

If you haven't noticed, I am a HUGE fan of E.Van Lowe's Falling Angels Saga! HUGE! Lowe has done an incredible job of writing the characters in this book. Megan, the main character, starts out as this incredibly self absorbed teenage girl that continues to grow into an amazing kick-ass, selfless heroine. Megan's mom, Suze,  both impresses me and infuriates me all in the same book. Guy is perfect and then, well... he isn't. That's what I love about these characters, they are wonderfully and perfectly flawed. Boyfriend from Hell and Earth Angel are both quick, fun reads packed with romance, action and humor. This is definitely a book you will want to start early because you won't want to put it down once you start. I do have one giant complaint Mr. Lowe, I can't believe you left us hanging the way you did at the end of Earth Angel!!!! If you haven't read the Falling Angels Saga you are seriously missing out. I can't recommend these books enough.

Okay so now onto the giveaway!! The very best part of this post I'm sure. E. Van Lowe is giving away ebook copies of both Boyfriend from Hell and Earth Angel to one of my lucky readers. All you have to do is leave a comment on this post or @ me on twitter "I want to win E's books!" @mybookaffair. That's it super easy right?

PLUS If you follow the link below you can enter for a chance to win a copy of both books signed by E. Van Lowe. Good Luck!!!!
link to form
https://docs.google.com/spreadsheet/viewform?formkey=dHpxT19yYlBzZmlGRmJleGRWdUc3clE6MQ

Hey Wait! Don't forget to leave a comment to win your ecopies of both Boyfriend from Hell and Earth Angel.