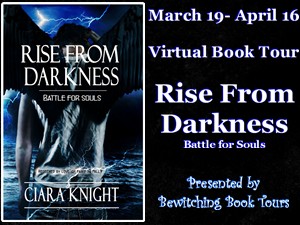 Alexander Lorre gives new meaning to the term “tormented teen”. He’s a newly fallen angel, which means he has the self-control of a three-year-old, the hormones of a teenager and the strength of an angel. When he rescues Gaby Moore from drowning, the chemistry between them is undeniable. With a local demon threatening Gaby’s life, he struggles to find a balance between remaining close enough to protect her but distant enough to control his desires. As danger draws closer, Gaby uncovers shattering secrets that will lead to an ultimate choice. Will she fight alongside her father, an earthbound hunter killing fallen angels and demons, give into the demon blood coursing through her veins and join the demon world, or save the man she loves from both? The first two choices damn her, but the last one could destroy them all.

The dreaded cut scenes. Authors have been faced with this issue often. Does this scene interrupt the pacing of the story? Is it in the correct POV? Is it necessary for the plot line? Sometimes authors cling to their beautifully written prose because they can’t bear to part with them, but sometimes scenes just have to be cut.

Here is a scene that was cut in my book, Rise from Darkness. See if you can determine the main reason this scene was cut? Hint, read the blurb.


Grace popped the cork off the vial. A montage of odors and colors exploded into the air. Each scent possessed a different healing or killing property. Light scents of Eucalyptus and Rosemary merged with heavier darker scents of mold, gangrene, and decaying carcass. Grace steadied her shaking hand.
She analyzed further. Yellow puffs floated out, from the Calendula, a Mediterranean plant, for the healing of the wound. Velvet green caressed her nose, Mullein a plant also for healing. The base color, from amethyst crystals, would serve as a bridge between physical and ethereal frequencies, creating an opening for enlightenment. Designed to help awaken the soul.
But the black and red flecks floating on top meant something different. The red from Anthurium, would be painful as poison killed the dead feathers. The black was a substance she didn’t want to think about. A rare plant used from a Greek sorcerer to torture and kill enemies.
Herak’s own special blend of hell for healing.
“It’s even worse than ya thought.” Sammy half chuckled.
“I’m afraid so. But knowing Herak, it will work.”
“From the look on your face. I don’t want to know what’s in there do I?”
Grace just smiled and walked around to the other side of the bed. Sammy continued to stare at the opposite wall. Back muscles flexed in anticipation.
Grace wanted to add words of comfort. “I—”
“It’s okay. Let’s get this over with.” Sammy clutched the sheets of her bed.
She removed the bandage to discover another inch gone from Sammy’s wing. Her previous efforts had only delayed the decay, but hadn’t stopped it. Praise be that Boon had brought the medicine when he did. Otherwise Sammy would have lost the entire wing by morning.
The first drop meandered down a feather and hung on the edge. Grace held her breath as it fell through the hole.
Sammy whimpered and contorted.
Knowing she was prolonging the inevitable torture, Grace poured the remaining liquid over the wound and placed both hands on her wing. It hovered on the edges of the wound. Then a purple mist of bitter fumes rose into the air, evaporating as it reached the ceiling.
Sammy thrashed and cried. “No. Stop!”
Her wing turned red and blistered. Grace concentrated on calming her, helping her fight through the pain.
“Grace. Stop. Please!” Her voice went horse and words became intangible as she continued to moan between sobs and cries of agony.
Off-white puss with black threads of burned feathers seeped from the blisters.
“There’s no way to stop now.” Grace choked. “Come on Herak. You better not have failed me.”
As she stood over Sammy’s tiny body, touching her wing. She prayed for relief. Several minutes passed then Sammy’s wing changed to an amethyst color. Now, Grace knew, the war raged on a different plane.
Grace prayed and chanted over Sammy. Keeping constant contact as the blackness invaded her mind. Visions of all consuming fire plagued Grace as she tried to lift some of the burden from Sammy. Not just visions, living snippets of time. Noxious smells of burnt offerings, touch of a cold steel claw, sounds of whips swishing in the air and smashing against bare skin. As Sammy and Grace witnessed Hell’s minions torturing innocents, forever lost to darkness.
They both panted barely able to breathe. Exhausted.
After one final explosion of visions, Sammy lay unconscious and Grace fell to the floor unable to hold on to Sammy any longer.
It was over.
But was it enough?

Okay, some of you might find this to be too flowery, but that isn’t the main reason it was cut. I’d revise for that. No, it was cut because neither my hero, nor my heroine, is in this scene. It deviates from the plot and adds an unnecessary point of view to the story. Since this is young adult it is even more important, in my humble opinion, to keep consistency through the story. Also, most young adults do not care what the nice old lady has going on. They want to get back to what is torturing the hero in the story, Alexander. Trust me; he is being tortured at that moment, too.
Have you read books where you stopped at a certain scene and thought, why is this even in the book?

About The Author:
Ciara Knight always had a passion for storytelling. At an early age, she wrote several short stories and poems, and in college she started work on her first novel. It wasn’t until late 2008 that she returned to her true passion of writing. Over the past few years she has penned five novels and joined several professional writing organizations to better her craft.
When not writing, she enjoys reading all types of fiction. Some great literary influences in her life include Edgar Allen Poe, Shakespeare, Francine Rivers and J K Rowling.
Ciara is happily married and enjoys family time. She has learned to embrace chaos, which is a requirement when raising three boys, and utilizes the insanity to create stories not of this world including, Fantasy, Paranormal, Sci-Fi, and Young Adult Dystopian.
Her first love, besides her family, reading, and writing, is travel. She’s backpacked through Europe, visited orphanages in China, and landed in a helicopter on a glacier in Alaska.
Website: www.ciaraknight.comFacebook Fan Page: http://www.facebook.com/CiaraknightwritesTwitter: http://twitter.com/#!/ciaratknight

Fans of young adult angel romance novels will be in heaven! (pun wasn't intentionally intended, honest) I was immediately intrigued by Ciara Knight's novel Rise From Darkness. Right away you are drawn into the story with action and wonderfully flawed characters. Gaby's character seems to be barely holding it together at first glance. When she meets Alexander and Sammy they instantly start to fill the gaping loneliness that she has been dealing with since the death of her mother. As the story unfolds and secrets are revealed Alex and Gaby both have their doubts that they will ever be together.

PLOT: A good twist on angels and demons. I've read a few angel books and this one managed to feel different. I was a little surprised that Gaby's reaction to finding out that fallen angels and demons walked the Earth wasn't more of a.......reaction, I guess. A few tiny plot holes, but I have decided to overlook them.
CHARACTERS: Very well written. Alexander is able to come off both strong and vulnerable. Gaby is sweet without being saccharine and really steps up when it's time. Boon quickly became my favorite character, read it and you'll see why. Grace, everyone needs a Grace in their lives. Sammy is peppy and adorable and I hope to see a lot more of her in the upcoming books.
WRITING: For the most part I really enjoyed Knight's writing style. Every now and again there were hiccups in the writing, and I would have to reread a little to figure out what was going on.
ENDING: I was really happy that there was not a major cliffhanger but that it is clear that another book will be forthcoming. Everything for this book wrapped up pretty nicely though.
KID FRIENDLY: Yes, I believe so. Gaby's father has become an alcoholic since the death of his wife, but the kids don't drink. There is violence between the angels and demons but I feel like that is to be expected when you have a book with angels and demons and it's not overly gory or anything.
OVERALL: one of the better angel books I've read.
COVER: I love the colors, and the picture resonates with the story well. I just wish they had had the model pull his pants up to cover his underwear. Does that make me sound old?