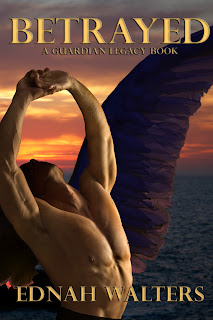 BETRAYED
Lil isn't just an average teenager. She's one of the Nephilim--the descendants of humans and angels--which gives her some serious psi skills and a mission for redemption. Just when Lil thinks she's found a balance between her normal life with human friends and her training to become a Guardian, she's warned that someone close to her will betray her. When the boy she loves starts acting strangely and one of her human friends acquires a supernatural ability, Lil begins to realize that someone is manipulating the people she loves... and won't stop until she's been lured to the dark side.

Congratulations to Ednah Walters!!! The Guardian Legacy Books will now be published by Spencer Hill Press!

Email ThisBlogThis!Share to TwitterShare to FacebookShare to Pinterest
Labels: cover reveal of Betrayed by Ednah Walters, YA book, YA Paranormal Romance