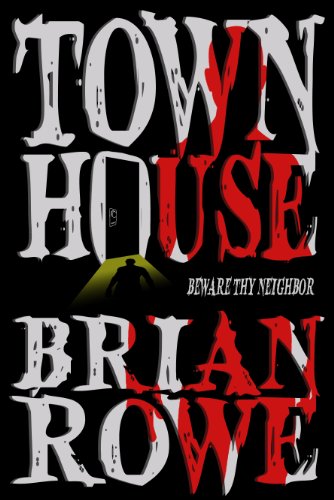 Townhouse Author: Brian Rowe
Summary from Goodreads:
Sara Crimson isn't happy about moving into a shady apartment complex with a man she barely knows. But after discovering she's pregnant with her first child, she decides to try to make a relationship work with the baby daddy Max, an up-and-coming talent agent.

An aspiring novelist, Sara at first is elated with the additional free time she has to focus on her writing. But as the days turn to weeks, she starts to suspect that something peculiar is happening in the Executive Townhouses of North Hollywood, California. People start disappearing, strange noises echo down the corridor, and an old, creepy tenant finds his entertainment value in staring at her from afar.

But what Sara doesn't know is that the hidden horrors that lie inside the complex are far worse than anything her overactive imagination could have ever conceived...

Sara yawned three times fast, each one louder than the last, and sat up on the couch. The stench of swiss cheese and meatballs lingered in the room. The TV was on mute, and the table in front of her was littered with messy dinner plates and tiny blobs of marinara sauce. She put her hand through her long hair and turned to her left to see that it was only 9:30 P.M.
Falling asleep at nine on a Saturday night. I really am becoming a parent.
She stood up and stretched, and realized that Max was nowhere to be found. More suspicious, she didn’t hear any tinkering with the computer upstairs. Sara loved how quaint the space was. She could keep tabs on where Max was at all times just by standing still and listening intently.
Sara sipped some water before trudging upstairs, her feet hurting like she had actually been the one lugging boxes and furniture around all day. She smiled with relief when she reached the top of the staircase and looked into the bedroom to see Max at the center of the bed, still fully clothed, fast asleep. She made her way into the room and draped a yellow blanket over him. He looked so adorable right now, so peaceful. She kissed him on the cheek, something she rarely did when he wasn’t awake, and turned down the dial on the wall to dim the lights in the bright room.
She grabbed her pajamas and made her way into the bathroom, which she had yet to really use and inspect. The dual sinks were a nice addition, leaving plenty of space for Max to shave his face on one side and Sara to shave her legs on the other.
Next she inspected the shower. It was sparkly clean, and ready for a test. She turned on the water and put her hand under the showerhead. It started spewing out furiously cold water, as if she had just moved to a suburb in Alaska where most of the pipes were frozen. She took off her shirt, revealing a basic white bra underneath, and pulled down her jeans to reveal a tight pair of white underwear. She tried the water again. It was lukewarm, but nowhere near hot. She figured she’d give it a few more seconds.
A conversation from outside diverted Sara’s attention to the window above the toilet. The conversation sounded to be more of an argument in the outside corridor, but by the time she darted her eyes down to the ground, a door slammed shut, and she wasn’t able to see anybody.
She looked up to see the window across the way, wide open, eerily welcoming, as if the long-socked creep from across the way wanted Sara to have an easy view into his bathroom.
Or maybe he wants an easy view into mine, she thought.
Sara shook the scary thought and moved away from the window. The mirror called to her. She checked out her body in the mirror, flaws and all. There was the tiniest of baby bumps, so subtle nobody but she and her mother would ever notice. She studied her stomach, as well as her breasts, which were starting to look fuller. She cupped them with her hands and fondled them the way a horny teenage boy would. She turned to the side and inspected her back and buttocks. She could see a modicum of cellulite around her rear end, but it was nothing to get overly anxious about.
Sara loudly sighed and then made her way back to the shower. She put her hand in. It was still only lukewarm. She bent over and turned the hot nozzle all the way to the left. The water was warmer, but still not scolding hot, the way she liked it. Annoyed, she slammed her right fist against the gray shower door.
That’s when she heard the noise. A grunt of some kind. It sounded like it had come from outside the window.
Sara held her breath. No. Couldn’t be. She wanted to jump in the shower like that little noise had never happened, but Sara was curious. She kept her torso bent slightly as to look like she was testing the heat of the water and not turning her whole body toward the window. She moved her head up and looked across the corridor. It was pitch black inside the bathroom window, but she could feel a presence watching her every move.
Oh my God. That creep’s watching me.
She wanted to shout it, scream it for the whole complex to hear. She also wanted Max to run over there and beat the shit out of that weirdo with a baseball bat.
But before she could do anything, she heard the man’s toilet flush across the way, followed by a bout of upbeat whistling. She saw the outline of his body exit into a hallway as he shut the bathroom door behind him.
Was he really just in there to use the toilet? Or was he spying on me?
Sara didn’t know for sure, but she did find it odd that he had entered his bathroom just at the moment she was undressing. She felt gross all over, like she had just been molested by one of her granddad’s inappropriate friends.
She made sure to take off her bra and underwear outside of view from the window. She didn’t enjoy her shower at all.

Brian on his blog at mrbrianrowe.blogspot.com

You can find Townhouse on Amazon and Barnes&Noble

You can find my review of Townhouse here