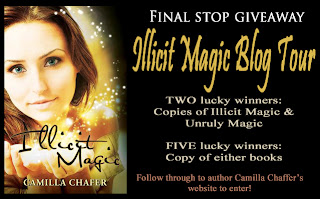 Seeing as I’ve now told you about the main character, Stella, I wanted to talk about the other predominant female character in the book, Étoile Winterstorm.


Étoile is quite an enigma with a strong personality. She’s the first witch Stella ever meets and by saving Stella, makes a friend for life. Étoile is one of the characters who I always had a strong sense of – physically I think of her as similar to Erin O’Connor or Natasha McElhone, quite aristocratic and elegant but with a clipped Manhattan accent that reflects her upscale background. Stella regards her as, “the type of woman who made heads turn because she was at once elegant and unique”.


Étoile does bring some amusement - she’s got a bit of a superiority complex through her powerful magic, something which doesn’t always bring out her best side, and is prone to sarcasm, plus she’s frequently amused by what she views as mundane. She also doesn’t take to criticism well and she views witches, unsurprisingly, as the most important of all supernatural creatures. (I think in later books we’ll see some back story emerge there.)


There is a lot of mystery surrounding Étoile. Her family are described as so incredibly powerful that they struggle with being part of the average world, though Étoile adapts well. She’s very much divided here due to her strong sense of family and duty – on one side, she does what she’s asked by the witches’ council which forces her to leave her job, her home and run errands on their behalf. On the other hand she’s aware that her sister Astra, who has disappeared, is potentially in a lot of trouble. It’s her sister’s absence that leaves Étoile and the third sister, Seren, with their powers substantially weakened, much to their chagrin. Despite her own conflicts, Étoile remains very much committed to helping Stella, and it’s less through guilt of being the only witch Étoile was able to rescue, and more due to a deep friendship developing. I imagine it’s because Étoile views Stella as almost a surrogate sister, replacing the one she lost.


Étoile’s powers are varied – she’s somewhat of a psychic, she can teleport and mind-read and her powers are amplified when closer to her sister Seren. They don’t often share what they see, but Étoile often betrays her glimpses into other’s heads by laughing.


Oh – about Étoile’s name (and I really debated about letting this clue out in the open!). There’s a clue in the meanings of the names that connect the three sisters, a clue which is shared in the name of another seemingly unconnected character. Can you guess what it is?

Hi, I'm Camilla and I'm the author of Illicit Magic and Unruly Magic, the first two books in the Stella Mayweather Paranormal Series. The series starts with a lonely young woman, Stella, who has been caught up in a terrifying witch hunt and is whisked thousands of miles away to what she thinks is safety to learn her craft. The series is a blend of magic, mystery and romance with a splash of humour - and while the girls really do go all out to save themselves, there's always a hunky guy or two on hand to help them out.


I live in London, UK but I try to travel as often as I can - lately I've been to Paris, all over Denmark, Luxembourg, and several US states. In my day job I'm a journalist and editor so I write for magazines, newspapers and websites throughout the world (my favourite assignment was spending a week riding rollercoasters - if you listen carefully you can probably still hear me screaming).

More than three hundred years after the most terrifying witch hunts the world has ever known, it's happening again.

Young witch, Stella, has to put her faith in strangers just to stay alive but she might not be any safer in their midst than from the danger she is running from.

There is more than one dark secret in her new family: Étoile’s sister is spoken of in fear and sadness; Marc is supposed to be a powerful witch but is missing his magic; where does the owner of their safe house vanish to every day and why does Evan have the eyes of someone not quite human? There is only one secret that someone will do anything to keep quiet, but whose secret is it and will Stella have to pay the price for silence?

You can find Illicit Magic at Amazon, Barnes&Noble, and smashwords

Don't forget to join the tour tomorrow at Aug 7 – Romancing The Darkside  http://romancingthedarkside.blogspot.com/

OK now for the giveaway! Camilla has been generous enough to offer one of my lucky readers a free
copy of  Illicit Magic.  Just fill out the form below and on August 14th I will announce the winner! Good Luck!